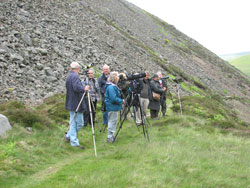 In view of the way the weather turned during the week after we got home, we were the luckiest people! We had a perfect trip?

Some of us had been able to set out earlier in the week to make additional visits: Harry and Lin spent time in the Lake District and joined us with tales of Eagle Owls in Lancashire. Mary and I spent Wednesday exploring a part of the Peak District and casually came up with some very convincing Black Grouse and a Raven on moorland stretches. It is fair to say that we thought that a good start.

On Thursday morning we met Colin, Bill, Ted, Alan, John and Ruth at Fairburn Ings RSPB near Castleford. Tree Sparrows were at the feeders to greet us, though we were less lucky with the Willow Tits. This site consists of a collapsed coal-mine and its associated spoil heaps, which, exactly fifty years on, provide a remarkable range of dry and wetland habitats with an assortment of warblers, wildfowl and waders. Perhaps our greatest surprise was a female Goldeneye, but a whole family of Black Swans came a good second.

The final 150 miles or so took us up past the Angel of the North and on to Embleton, on the Northumberland coast, where our hotel looked out onto sand-dunes, a golf course, and Dunstanburgh Castle. It was no surprise therefore that most of us were out at 6 a.m. next morning searching through the multiple offerings of a nearby nature reserve and enjoying the visual feast of auks, Gannets and terns off-shore. On subsequent mornings we repeated the exercise below the hotel, finding Little Terns among the many birds off-shore, while the dunes and hedges below the hotel produced numbers of chats, pipits and buntings. Three Grey Partridges fed on one of the fairways, but Colin?s sharp ears had located a Grasshopper Warbler. No surprise then that we were twice back in the gloaming after supper, eventually to locate a shadowy bird reeling from the top of a small bush.

But all of this was incidental to the main trips? 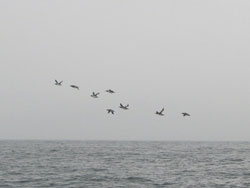 Friday was spent on the Cheviots, in moorland terrain south-west of Wooler. We had hardly parked the cars below the heights of the curiously-named Skirl Naked when our local contact, Trevor, spotted the first Dipper in the stream. We soon found Whinchats, Stonechats and Wheatears up the valley, with Willow Warblers in the ancient alders, but the hour we spent watching the steep hillside opposite was the most magical. The calls of Ring Ouzel brought us views of at least two and maybe three birds, as each challenged its neighbours. Oystercatchers and even a pair of Goosanders flew along the valley, while Curlews fluted along the skyline above us.

In the second valley we made our bid for specialities in a heavily-wooded spot by another stream. Spotted Flycatchers obliged, but Pied were less helpful, and Redstarts likewise. But we did see a Red Squirrel move through the canopy. A pair of Curlews spent some time over the hill-top in pursuit of a very tatty Buzzard, but it was the Peregrine streaking past later that made a more impressive sight. As the afternoon wore on, birding was somewhat less fruitful, until a pair of Lesser Redpolls showed up. A Painted lady Butterfly was the first of the season for most of us. We spent an age scanning the hillside bracken for Red Grouse, but eventually decided to pursue another lead. Trevor told us of a high moorland road where we might do better. And we did! It took about ten minutes to find a family group which showed beautifully in the scopes. As we searched, Alan saw a Merlin streak low over the moor, but it was too quick for the rest of us. 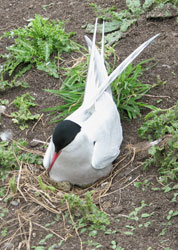 Saturday was the real highlight of the trip. On arriving at Seahouses, we found Eider ducks lounging in every available corner. We booked ourselves onto the boats in a state of high anticipation. The weather had been too rough lately, but we had timed it perfectly and enjoyed a smooth run out to the first rocks. There is nothing quite like the excitement of seeing strings of Guillemots and Puffins streaking past the boat, sometimes within a few feet ? unless it is the excitement of a skein of twenty or so massive Gannets doing the same thing! Kittiwakes and Fulmars also passed close by. The place was seething with birds! Soon we were by a rock and eye to eye with Cormorants, Herring Gulls, a young Grey Seal and a Great Black-backed Gull. A Shag and a Cormorant stood side by side as if to ensure that we made note of their differences before going any further.

None of that had really prepared us for the mass of birds thronging the cliffs as we approached the outer island of Staple. The gentle swell of noise was the second thing to register as we ran into the landing. Then, as we climbed the steps into the throng of birds, we experienced the pervading fishy scent of the thousands of sea-birds that occupied the rocks and burrows of this tiny island.

Suffice it to say that the next two hours were extraordinary, as we watched birds attend eggs and chicks. Guillemots hurtled in on the wing, stalled, plummeted into the throng, and then waddled absent-mindedly to find their partners. Razorbills quietly showed them how to behave more sensibly. Shags shuffled around stealing bits of nesting material to add to their flat structures. Kittiwakes returned, shouting their name as their changed places on the high dome of weed. Fulmars sat tight in soft corners. Inevitably, it was the Puffins that entertained most. Hurtling in like large mechanical beetles, and carrying precious cargoes of sand-eels, they dropped next to their burrows and were underground in a trice. A bird would then reappear, look around, find a bit of height on a rock, wind up its wings, and then hurtle off again on the next mission. Funny to watch, but not so funny if you are that tiny bird trying to dodge the lurking Herring gulls and Lesser Black-backed Gulls! Amazingly we also saw one tiny Rock Pipit gathering insects for her young near all of this chaos and danger, and even a butterfly or two. 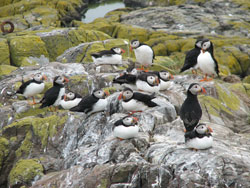 All too soon we were on the boat again for the run to Inner Farne, via rocks where a close encounter with the story of Grace Darling gave us an even closer encounter with some massive adult Grey Seals. Through a turbulent gap for a short way, we then made the smoother run to a landing under St Cuthbert?s Chapel.

This was the bit that we remembered so well from Bill Oddie and David Attenborough ? or from Alfred Hitchcox?s ?The Birds? to be more honest! As we climbed the path, Arctic Terns swooped and screamed in indignation as they protected territories built within inches of the boardwalk. It was a curiously paradoxical privilege to have one perched on my hat and trying to drill through to my scalp with its blood-red, sharp little bill. As for the guano assault, it took three goes to sponge that out of my jacket later! The beautiful little blighters were everywhere for the first stretch, but they had no manners and it was a relief to get beyond them to watch the large cluster of beautifully-behaved Sandwich Terns. Then came the gentle Eider Ducks curled up in the weeds or on the rocks, then many more of the now-familiar auks, Shags and Kittiwakes. And there was even an Oystercatcher in a rocky hollow near the lighthouse.

With a bit of time to spare for some more challenging birding, some of us spent the last half-hour searching through the flock of terns on the beach rocks near the landing stage. Most of these were non-breeding birds, some with clear signs of immature plumage. They included Arctic, Common and Sandwich Terns, but we were hunting for some Roseates that had been seen the day before. No luck though, and a Ringed Plover was not much compensation. 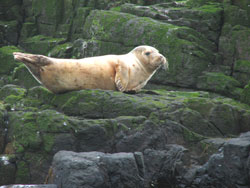 The return journey was still an active one, though not for a bunch of birded-out passengers. Ted and I were the two lucky ones who spotted the one Manx Shearwater of the day. And those impressive Gannets just kept on streaming past on their way back to the Bass Rock (real specimens of Sula bassana, these!), which was some 50 miles to the north.

One final pre-breakfast session on Sunday, and then we were on the road south, but with an important break of a couple of hours at Blacktoft Sands, near Goole, some 160 miles down. The fifteen mile detour proved to be well-worth the trouble, with the pools, reed-beds and bushes producing, among other things, Avocet, Bittern, Black-tailed Godwit, Bearded Tit, Marsh Harrier, Barn Owl, Tree Sparrows, and even two Garganey drakes.

Making our way home from there independently, Mary and I switched on our own kettle soon after 7 p.m. We had over 900 miles on the trip meter, an immense increase in the year list, and several hundred photos to process later. We both agreed that this had been one of the best birding trips ever. Our heartiest thanks for that go to Colin for his superb planning and to the others for their good company.