France on a shoestring

A small group of BOC Members wanted to do some different birding and see a few special species in March so took advantage of a one night stopover in France. Ferry fares are often very cheap at this time of year and the DFDS lines Calais to Dunkerque service offered a package of car plus up to four adults for £20 return. We caught the 08.00 ferry arriving two hours later at 11.00 French time. On the way Gannets, gulls and Kittiwakes were abundant and Sandwich terns and Shag were sighted close to Dunkerque.

Our first main stop was Marquenterre Reserve in the Baie de Somme, many say you love it or you hate it but it certainly offers a lot of birding in a small space. Entry was ?9.90. For more details see http://www.baiedesomme.fr/parc-du-marquenterre-en-baie-de-somme-parc-ornithologique-oiseaux-migrateurs-animation-et-voyage-nature–fre3.html. In the car park, we ate our pre-packed lunches from home (we took lunch food for two days – some of us for six!) before entering the Reserve proper. Unusual Great Tit songs occupied us while we munched! The reserve has toilets and a café.

A large wood structure close to the entrance provides a birds eye view of the reserve and from there we started to tick off many species on our impressive bird list of ninety for the trip. Maybe the Crossbill that called from the top of a pine was good but the White Storks nests and Spoonbills carrying nest material were better? Or was it the pair of Whooper Swans on the pools? As we made our way along the paths and tracks seeing the fields, ponds and lakes it was evident that spring was already in full flow. Willow Warblers sang everywhere, Chiffchaffs gave visual comparison opportunities while Cetti’s Warblers sang in the ditches and Swallows and Sand Martins fed over the lakes.

Avocets were everywhere in impressive numbers with Oystercatchers and a few Redshank and Snipe. The odd Black-tailed Godwit could be seen here and there. White Wagtails were everywhere and later a distant Yellow was seen (possibly M.f.Thunbergi). A solitary immature Crane also fed happily in a field. 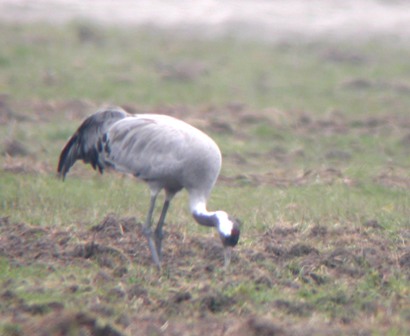 Plenty of duck were present with Pintail, Gadwall, Teal, Wigeon and Shoveler widespread. Grebes were better, Great crested and Little were outshone by up to five Black-headed Grebes in superb plumage.

Last time we came here Mediteranean Gulls were breeding but this time we saw only Black-headed preparing to breed. However, about fifteen Little Gulls provided some great entertainment.

About this time rain tried to stop play but a bit of patience saw us able to walk most of the reserve and return via the heronry where Spoonbills, Grey herons and Little Egrets were already on nests with White Storks in good view. We saw Cattle Egret over the reserve and Night herons also breed there.

The hides are big but provide challenges as the small holes to view through are not always aligned to individual heights, Ted also found the ceilings a problem at times! However, photographic opportunities are considerable with birds quite close to the hides. 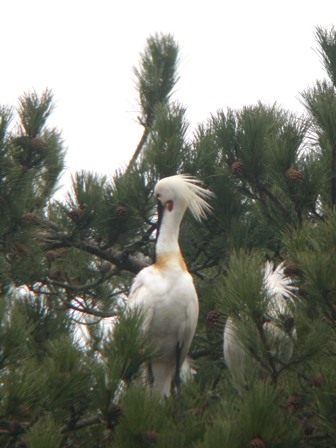 After our visit, and allow at least four hours and more there if you can, we set off for an overnight stop at a Formule 1 hotel in Venette, near Foret de Compiegne about 1½ hours drive away. This hotel chain will provide a room for ?26 a night with twin beds and a wash basin. Toilets and showers are a few steps away. A basic breakfast is about ?3. It’s not the place you’d take your partner to if you wanted to impress her but value for money is unbeatable. Beer(s) and a meal for the night down the road was more than the cost of the hotel!

On a wet morning we made our way to the forest south of Compeigne on the D973 and found a suitable parking place midway along the Route Forestiere des Nymphes. As the weather dried up we started to explore. The forest is actively managed, everywhere trees are chopped down and left lying and replanting or regeneration is evident. Although some areas of young growth looked marginally interesting tall trees dotted around gave hope and as we entered the forest on foot we realised some oases of very old trees had been left amongst the younger growth.

Marsh Tit were everywhere, Long-tailed, Blue and Great Tit were added to by a party of Crested Tit. A pool of rain water on a track led to bathing and drinking opportunities and we watched as Chaffinch, Robin and suddenly, two Hawfinch dropped by.

Into the wood as we found Treecreeper (not Short-toed – we checked!) and Nuthatches, we heard an unfamiliar call which turned out to be a wonderful Middle Spotted Woodpecker, a really special find and it showed remarkably well – but not one of us had a camera! Nearby, a Tawny Owl was disturbed and flew to a visible branch for good observation.

Naturally Black Woodpecker was a target and while Green was heard singing (or was it Black?) and Great Spotted were seen, we could not locate the prize. However, late on our visit as we had to head back towards port we heard the flight call close by without doubt. The lack of a sighting provides the spur for another trip!

A two hour drive back to Calais provided rest, (except for the driver) with a reviving Black Kite en route and after a vital mission to collect a pre-ordered wine supply from a French vineyard we just had time to visit Oye Plage, a coastal reserve between Calais and Dunkerque. As we approached a Marsh harrier over the fields gave us hope and we were surprised to find a really good site. With limited time we managed only the main locations and hides but added a number of species such as Curlew and Greater Black-backed Gull to our lists. Many species were here and it is worth a good half day at least as a Mediterranean Gull breeding colony is known and the habitat was very promising.

Our haste meant we could not do the site justice but we will be going back there soon. Only a 20 minute drive from the ferry terminal it provided a fitting end to a good visit and we arrived home about 11pm very pleased with our budget visit. Next time we may go a little later as Bluethroat and more passage migrants will be present to improve our lists even more. We covered 600 miles in the car and sharing the costs, ferry, hotel and entry fees etc it cost much less than £100 a head so well worth trying again – but take cameras and you’ll get plenty of opportunities!