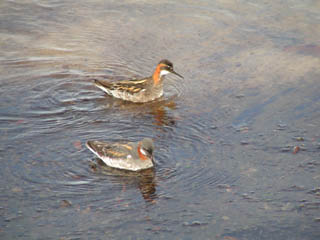 Four years ago I went with Finnish friends on a birding trip through Lapland and on to the Varanger fjord. I was so impressed by the range and numbers of birds and by the beautiful arctic light, that this year I arranged a similar trip with a friend new to the arctic. We flew to Helsinki and on to Rovaniemi where we hired a car and stayed initially near Kuusamo in the east of Lapland. Here there is a mixture of bog and birch forest on the low land and ranges of hills with old coniferous forest. It is here that the famous (at least in Finland) Kuusamo bird race is held in mid June. We stayed in a beautifully equipped log cabin on a lake, with a splendid bog a mile away – Cranes, Broad Billed Sandpipers, Ruff, Spotted Redshank, Greenshank and Redshank, Red-necked Phalarope, Dunlin, Snipe etc; on the fringes Little Bunting and Waxwings and in the surrounding birch forest, lots of Capercallie. And all the time, the song of the ubiquitous Wood Sandpiper.

A day’s search of the Valtavaara ridge found Siberian Jay and a singing Greenish Warbler but failed to produce a bird that I had been longing to see, the Red-flanked Bluetail. Fortunately, I had arranged to go out for an evening’s owling with Olli Laminsolla, the organiser of the Kuusamo Bird Club and a professional ornithologist. He showed us Eagle Owl, Hawk Owl and Tengmalm’s Owl at their nest sites. Although the latter two species are not disturbed by people, with Eagle Owl we were much more circumspect, watching from a distance of well over 100 m.

Olli had just heard of a singing Bluetail on a different Ivaara ridge, so rather than go to bed, we continued through the “night”; around 4 am heard the song in a beautiful area of old growth boreal forest and eventually located this spectacular bird perched at the very top of a fir in bright sunshine.

From Kuusamo, which is on the arctic circle in Eastern Lapland, we moved north, in snow and rain, 600 km to the Varanger fjord in the north of Norway, stopping frequently to explore the changing habitats. Reindeer are everywhere; other mammals we saw were arctic hare and arctic fox. The roadside turned up Lapland Buntings and huge numbers of the feldegg (black headed) race of the Yellow Wagtail. In low old birch forest, we saw Siberian Tits and as you go north the Brambling replaces our Chaffinch. 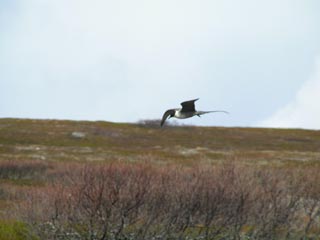 After two days we got to the Varanger; the arctic sea is rich in fish and so full of seabirds and the coastal tundra and willow scrub is rich in breeding waders, skuas and a good many passerines. We stayed in a house on the beach at Ekkerøy, with Eider, King Eider, Goosander and Mergansers offshore, Red-necked Phalaropes swimming in the bay and Red-throated Pipit feeding young in the garden. Bluethroats were almost anywhere there was a bush to nest in, vociferous and prominent, quite unlike the skulking little brown things we see drifted on migration.

We took a boat from Vardø to Hornøya, which has the one of the densest and most diverse seabird colonies I have seen, including five species of auk – Puffin, Common, Brunnich’s and Black Guillemot and Razorbill.

On the tundra, often many kilometres from the sea, Arctic Skuas and Long-tailed Skuas heavily outnumber the Arctic Terns that seem to spend 101% of their time defending themselves. On the deeper pools, Velvet and Common Scoter, Smew and Long-tailed Ducks. In marshy areas, Ruff, Temmincks Stint and, of course, Wood Sandpipers. We were told that there were about 30 White-tailed Eagles around the Varanger and along the beach, close to our house, four of these huge beasts were hanging out.

We missed Rustic Bunting, supposedly numerous but very furtive and with a very short song period, and Steller’s Eider, that had already passed through. In all we had a delightful ten days and 141 species, including many of my favourite birds, two of which are shown below.