Ring-necked Parakeets have expanded into Berkshire rapidly over the last 20 years. Largely restricted to the Windsor area in the late 1980s, by summer 2008 they had spread to much of the east of the County. This map compares the breeding distribution in the Atlas surveys of 1987-9 (blue circles) with the summer 2008 data from the current Atlas surveys. 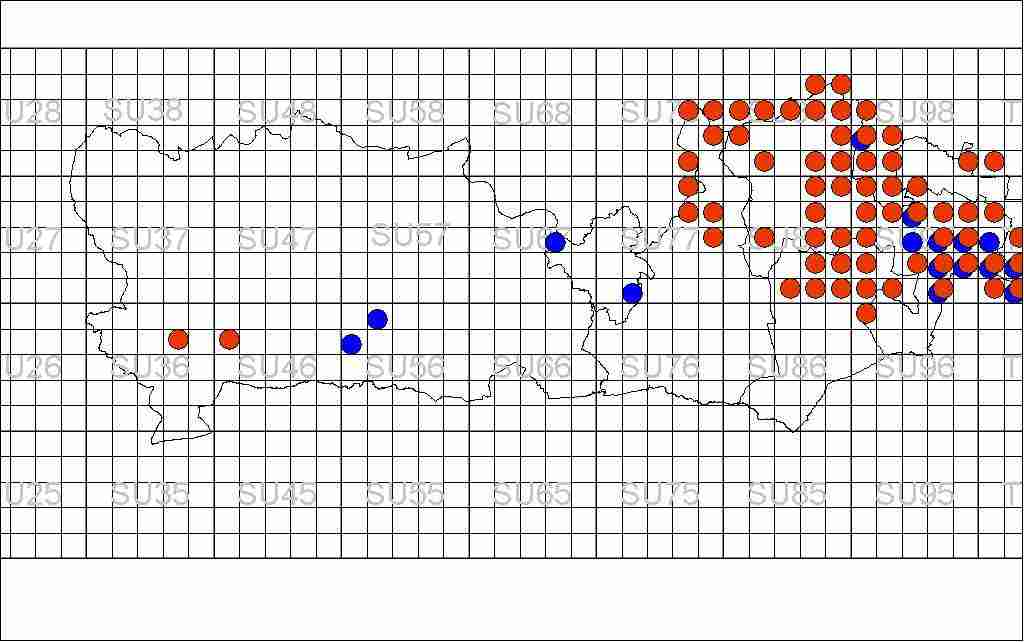 We have had a request (below) for help in monitoring this expansion from Dr Alexa Lord at Imperial College, London:

We have recently begun a four year study into the effects of the ring-necked parakeet on native bird species in the UK. As part of this work it is essential for us to have accurate estimates of the current population size of the ring-necked parakeet in the UK, and its growth rate. The last census was carried out in 2001/2, and current estimates of population size are based on this data and the growth rates that they estimated at the time. This gives a current estimate of 20,000-50,000 individuals.

In order to estimate the current population size I intend to co-ordinate a large scale roost count. The first count will take place on Sunday 3rd January 2010, and will be simultaneous across as many known roosts as possible, using the same methods at all sites. If the count is successful I intend to repeat the count every three months to enable us to estimate the population growth rate and any changes in roost usage. I am now seeking volunteers who would be willing to assist with two elements of this project:

Counts will begin two hours before sunset (14:04 on Jan 3rd) and will continue for half an hour after sunset (16:34) to allow for any individuals arriving in the residual light of dusk. The intention is to have several people counting at each site in order to control for individual error and allow us to cover all entry routes into the roost. No experience is necessary to assist with the count as we will provide a full, clear protocol to follow, along with data collection sheets. The data that we collect during these counts will be prepared for publication in relevant journals and will be widely publicised.

Due to the large number of responses anticipated I have attached two simple forms that can be used to send the relevant information to me by anyone wishing to assist with either request, making it easier for us to compile the data. The first form is for details of any known roosts, the second for persons willing to assist with the Jan 3rd count to send me their contact details. Forms and queries should be sent to parakeet imperial.ac.uk