This year there have been many more sightings of Oystercatchers in Berkshire than is normally the case. Signs of potential breeding activity were seen in at least two areas and breeding was finally proved on 21 May when Roger Stansfield and Ken Moore of TABCG spotted a pair with a brood of four chicks on an island on Theale Main Pit. 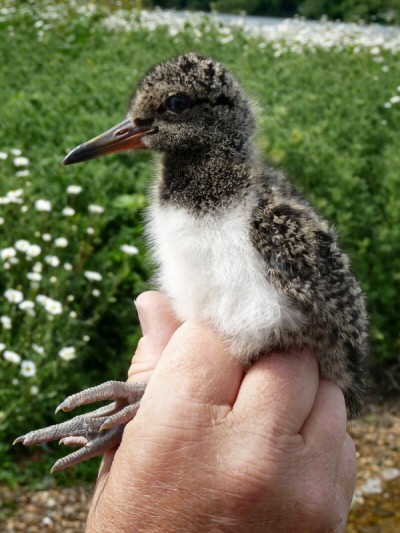 Oystercatchers are not common breeding birds on the coasts of south east England and inland breeders are very uncommon throughout southern England, although they have been gradually spreading south through the Midlands. The first June record in Berkshire was as recent as 1986 and since that time they have become commoner throughout the year but the vast majority of birds appear in ones and twos and only stay for a few days at a time. Breeding season records are still not common and this is the first year that there has been any real suspicion that breeding might take place.

Thanks to the kind assistance of Pat Forbes of Burghfield Sailing Club a small party were able to visit the island on Wednesday 26 May. One of the original chicks had already disappeared but all three survivors looked fit and healthy.

Two of the chicks were caught and ringed to see if we can get any information on future movements of the birds and how long they live. Catching them is completely humane as the chicks hide, crouch and “play dead” as soon as they hear the adults alarm calls. The only problem is finding them as their camouflage is excellent and they don’t move until they hear the all clear from the parents. Despite careful searching the largest chick couldn’t be found and all three were seen back with the parents within a few minutes of us leaving the island.

Hopefully the remaining chicks will survive and return to breed themselves in the future.